Tesla has released a new software update (2022.40.1) that delivers improved charging efficiency for faster charge time and reduced energy costs, along with a few other goodies.

Some Tesla owners are waking up to a new software update bringing new features and capabilities to their vehicles.

All Tesla vehicles built over the last 10 years are equipped with over-the-air software capability, and the automaker has taken full advantage of that capability with regular software updates.

Those software updates sometimes bring new games and fun features as part of Tesla’s mission to make the Tesla ownership experience as exciting as possible, but sometimes they also bring new capabilities and even more efficiency to the powertrain.

This new 2022.40.1 software update being pushed to the Tesla fleet right now fits into both categories.

Not a Tesla App posted the release notes showing the biggest part of the 2022.40.1 software update is improved charging efficiency.

Tesla wrote in the release notes:

During DC fast charging, the thermal system controls have been optimized for each charging station’s power capability, improving both charging and on-route battery preconditioning efficiency. This results in fast charge time and reduced energy costs.

The software uses an algorithm and analyzes data to suggest rent prices. It’s used by some of the nation’s largest property management companies.

SEATTLE — A software company and nine property management groups are being accused of artificially inflating rents. An investigation found the software that sparked the lawsuit is used by management companies in Seattle.

The lawsuit was filed in US District County in San Diego by renters. It alleges the property management companies and Texas-based software company RealPage formed a cartel to artificially inflate rent prices and decrease the supply of multifamily real estate in violation of federal law.

RealPage owns software that uses an algorithm and analyzes data to suggest rent prices. The software is used by some of the nation’s largest property management companies, including Greystar and Essex Property Trust, Inc.

While the software is used nationwide, an investigation by the non-profit newsroom ProPublica found this software is “overwhelmingly” controlled by RealPage clients in Seattle’s Belltown neighborhood.

ProPublica’s investigation found that “70% of apartments [in Belltown] were overseen by just 10 property managers, every single one of which used pricing software

Don’t miss a moment from Paris-Roubaix and Unbound Gravel, to the Giro d’Italia, Tour de France, Vuelta a España, and everything in between when you ”,”name”:”in-content-cta”, “type”:”link”}}”join Outside+.

Wahoo is flexing its hardware and software capabilities, putting together a Wahoo X Indoor Cycling package in the US that combines a subscription to its Wahoo X training platform with a KICKR SNAP SmartTrainer.

The package costs $30 per month and includes 12 months of access to Wahoo X, which includes access to both the Wahoo RGT virtual ride software and Wahoo SYSTM, an extensive training software with a large library of workouts.

Already a big name in hardware, Wahoo is trying to become a one-stop shop for all things training. This package makes it easier for cyclists to get set up with everything they need.

As Wahoo makes inroads into Zwift’s virtual ride software territory, and Zwift does the same into Wahoo’s hardware space, it’s creating tension between the once amicable companies. Earlier this month, Wahoo took legal action against Zwift over claims of patent infringement in the $499 Zwift Hub trainer.

Porsche has confirmed that the all-electric Porsche Macan has been delayed to 2024, which goes to show that reports from earlier this year were accurate.

In July, sources told Germany’s Automobilwoche that the electric Macan and its PPE platform sister model, the Audi Q6 e-tron, risked being delayed by about a year because the Volkswagen Group’s CARIAD division is behind in developing advanced new software. Porsche has confirmed the delay in the share prospectus issued as part of its IPO last month, where it is noted that deliveries of the Macan EV are planned to begin in 2024.

Rather worryingly, the automaker warns in the prospectus that since the E3 1.2 software platform is still under active development, “a risk remains that the Group will not achieve its existing cycle plan for new vehicles on schedule, in

BHPian carthick1000 recently shared this with other enthusiasts.

In the last 4 weeks, there have been 3 software updates. The minor ones were not very interesting, but the major one is a quite useful and insightful update.

These 2 have been minor updates improving the Theater mode and Portuguese voice navigation. The Theater mode update is quite useful as when you are watching something at a supercharger stop, you can minimize and look at what charging % you are at or any other things you want to check. This was not possible earlier. 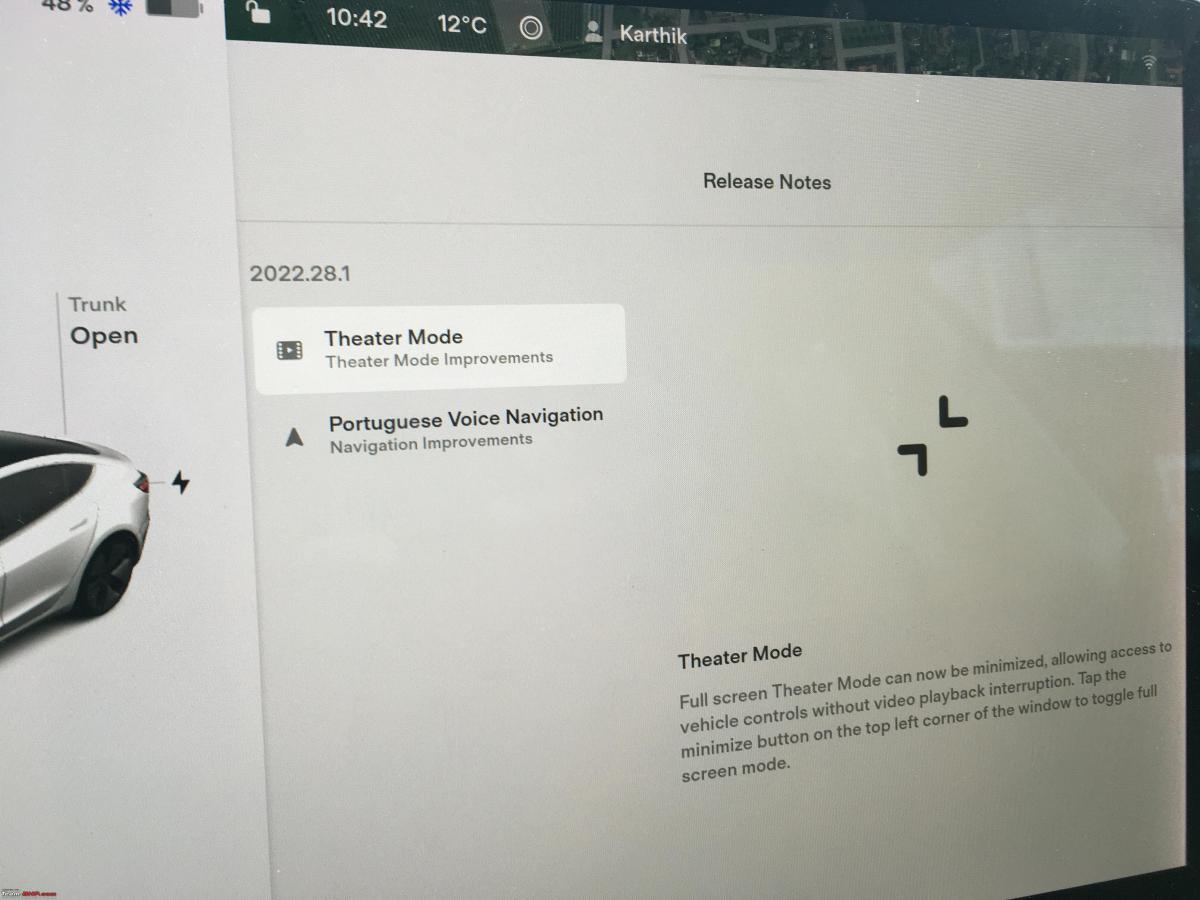 As mentioned earlier, this update brings some insights into energy usage, some useful features to the phone app and additional info about supercharger locations.

Earlier when planning a trip, using the energy app we can see the efficiency graph only. But with this update, the efficiency along with energy usage while driving and parking (2 extra tabs) is given with a bit more