Clean water is becoming increasing precious, wherever in the world you live. Growing populations need more of it, but climate change means there’s less available. Addressing this means talking about waste water, which isn’t a popular topic, but hey, buckle up. Up to 75 per cent of household waste water is “greywater”, the lightly contaminated kind that comes from showers, baths and washing machines. Hydraloop is a device that collects and cleans this stuff to make what they call “household water”, suitable for flushing loos, irrigation and feeding back into the wash.

The inventor, Dutchman Arthur Valkieser, was inspired to act when he realized how much drinking water is piped into cisterns to flush loos – around 35 liters per person per day. Hydraloop flushes with cleaned greywater instead, an idea so brilliant that the World Intellectual Property Organization, a UN agency, has recognized it as a tool to help reduce water consumption.

Preparing the plumbing is, according to Hydraloop, “not difficult”, and they provide clear instructions. The unit takes up around 4.5sq ft, so not dissimilar to having another large fridge. (Smaller versions of Hydraloop are due to launch next year.) It cleans the greywater in six processes, beginning with sedimentation and ending with UV disinfection – but no filters are used, so maintenance is light touch. An accompanying app lets you pay as much attention as you like to your water savings, but otherwise it’ll just go about its business, cleaning and storing the water (300 liters in the Hydraloop H300). The upshot: you save up to 45 per cent of mains water consumption, reduce sewage emissions by up to 45 per cent and reduce your overall energy usage to boot (around 400kWh per year on average).

Some people may furrow their brows and narrow their eyes at the idea of ​​washing clothes in previously used water, but these are the kind of mental hurdles we’re going to have to vault in order to live sustainably. Hydraloop’s slogan is “use water twice”, and it’s an eminently sensible idea. Hydraloop H300, £3,195, hydraloop.com

London-based Nothing caused a kerfuffle last year with its Ear (1) earbuds, a brave attempt by a small firm to enter an Apple-dominated space. Now we have the Phone (1), a similarly audacious move into a crowded market, but with a number of eco credentials that helped pre-orders reach around 200,000 units. It has a recycled aluminum frame, half its plastic components are made with bio-based or recycled materials and it’s packed in recycled fibre. The battery is replaceable and there’s a UK-based repair center to discourage the practice of flinging broken phones into a skip. The camera is exceptional, the casing is semi-transparent and distinctive. A smartphone with the emphasis on smart. Nothing Phone (1), £399, nothing.tech

A brush with sustainability

Billed as the world’s most sustainable electric toothbrush, Suri acknowledges the environmental impact of brushing our teeth: four billion toothbrushes heading to landfill or the ocean every year, unrecyclable plastic parts, excessively wasteful packaging and so on. These brush heads are made from corn starch, the bristles from castor oil and Suri recycles them free of charge for UK and US customers. It has an attractive, slim profile that makes most other electric toothbrushes feel rather chunky, two modes (“everyday clean” or “polish”, depending on your mood) and that’s about it, but who needs bells and whistles? You’re only brushing your teeth, after all. (And with a relatively clear conscience.) Suri toothbrush, £85, trysuri.com

There’s some strange stuff going on inside this unit that’s akin to witchcraft. Pop your everyday food scraps into its bucket, turn it on and come back a few hours later on the promise of a container full of dirt ready to feed to your plants. That’s precisely what it does, using a combination of heat, abrasion, oxygen and “helpful bacteria”, and the results are quite something. There’s just one niggling concern – the fact that you’re leaving an appliance running overnight – but the firm devotes a lot of effort to detailing its carbon footprint and assures us it is lower than that of the same waste going to landfill. Moreover, it handles a particularly unpleasant piece of kitchen admin in a highly satisfying manner. Lomi Kitchen Composter, £499, uk.pela.earth

Rainwater is another important and overlooked water source, so easily collected but usually left to disappear down the drain. The majority of water butts are fairly unsightly, but this one was the result of a graduate design project that gathered considerable momentum and has since won a clutch of awards. A built-in five-litre jug automatically fills whenever it rains for easy deployment in and around the garden, while the excess runs into the 70-litre raindrop-shaped container below. As well as reducing mains water consumption, the rainwater is better for plants than tap water: fewer salts and chemicals, more nitrates. The product is made using wind energy and, as you might expect, is 100 per cent recyclable. Elho Pure Raindrop, £269, elho.com 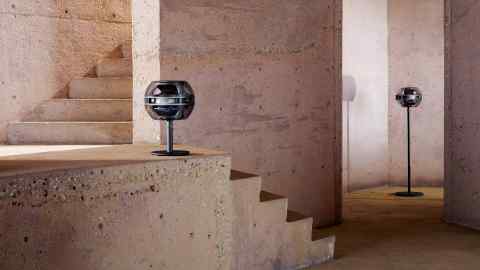